The calculation, construction and application for pressure control and flow limitation

Flow measurement of liquid, gas and steam according to the differential pressure principle has been recognised principle for very many years using orifice plates, venturi tubes and flow nozzles. A restriction in the pipe line creates a pressure drop if the fluid flows. The pressure drop is determined by the velocity of the fluid.
The method is thoroughly described in many standards, practices and books.
Orifice plates can also bee used for pressure control and flow limitation.
This special use is not covered by international standards and is only scaresly mentioned in literature. 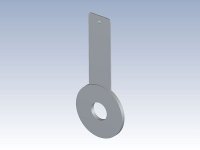 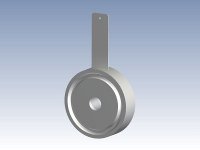 A safe flow limitation is obtained through the application of a critical flow device. 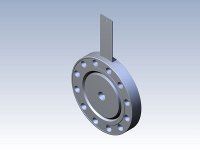 If the pressure in Vena Contracta (because of high velocity) decreases to the vaporisation pressure of the liquid, a cavitation zone is created. This cavitation zone will act as a flow limitation.

Cavitation
Cavitation occurs frequently in liquid flow restrictions where a large pressure drop exists. When the downstream pressure is below the vaporisation pressure vapour bubbles are created. When the liquid has passed through the restriction orifice plate the area is increased, the velocity decreases, and the pressure increases. This leads to the collapse of the vapour bubbles.
This collapse of the bubbles generates noise, and the plate as well as the tube will erode. It is, therefore, important to avoid a full cavitation through a liquid flow restriction.
A differential pressure of delta P as indicated below should be used:
Fl= delta P/(P1-Pv )< 0,7
Fl= Critical flow factor
P1= Upstream pressure
Pv= Vaporisation pressure
At particularly large drops in pressure more restriction orifice plates in series are used to avoid full cavitation.
Discharge Coefficient C
The discharge coefficient C is dependent on the Reynolds No. It has been shown by Cunningham that a standard plate constructed according to ISO 5167 cannot create a critical flow.
Ward-Smith has shown theoretically that critical velocity can be obtained, when the discharge coefficient C is approaching 1.
The discharge coefficient is 0.839 if:
1 < t/d < 7
Where t = thickness of the plate and d = bore of the plate.
The ratio t/d can be reduced to 0.3, if the up stream side of the plate is very sharp. Furthermore, t/d can be increased to 10 or more, if the bore is very smooth.
Below t/d=0.3 a critical flow cannot be obtained.
Calculation of the thickness of the plate
Apart from the determination of the thickness of the plate, with respect to the discharge coefficient, the determination must also include a calculation with regard to the strength of the plate.
Different standards can be used for the calculation, but a common standard is the ASME.
According to ASME Boiler and Pressure Vessel Code section 8 div. 1 chap. UG 34 the thickness of the plate is calculated as a flat blank.
Since the plate has a bore a complete calculation can be made with regard to re inforcement of the bore according to chap. UG 39 (b).
Construction
Restriction orifice plates must be sharp edged and with a cylindrical bore, i.e. without bevelling on the backside. Apart from this the construction details are as for standard orifice plates for insertion between RF and RTJ flanges. However, it should be considered for thick RTJ plates to have a RTJ groove in the plate instead of having the plate as a part of a seal ring. This will give a better sealing, since a standard soft seal ring can be applied.